Congratulations to Aaron Domsky and Lauren Taylor, who each received $500 scholarships on Tuesday, June 4 at the UDHS Senior Academic Awards.

Aaron Domsky has appeared in our productions of Young Frankenstein, A Charlie Brown Christmas, Elf, the Musical JR, and worked crew for Sweeney Todd.  He will attend Temple University’s Tyler School of Art for Graphic Design.

Lauren Taylor was a cast member in The Addams Family, Happy Days, and Young Frankenstein.  In addition, Lauren has performed at least one song in all five of our Cabarets! She’s going to the University of Pittsburgh to major in Political Science and minor in Theatre.

This summer, Lauren is playing Savannah and Aaron is playing Wells in our production of Freaky Friday. Performances are 7:30PM on July 17, 18, and 19 at the Upper Dublin High School Performing Arts Center.

Thank you to our generous patrons, especially those who participated in the basket raffle at our Murder Mystery Dinner Theatre. Everybody’s Theater Company plans to continue supporting students in their higher education endeavors. 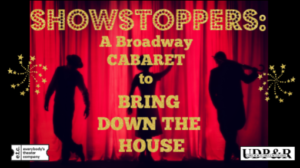